Computers of this type are inexpensive and generally accessible. These are primarily helpful for getting more processing power at a reasonable price.

Data in Hadoop is stored on a distributed file system known as a Hadoop Distributed File system, which is similar to the local file system of a personal computer.

Computational logic is transmitted to cluster nodes (servers) that store data in the processing model, which is based on the “Data Locality” idea.

Nothing more than a compiled version of a program written in a high-level language like Java makes up this computational logic. Such a program works with Hadoop HDFS data.

The below diagram shows various components in the Hadoop ecosystem- 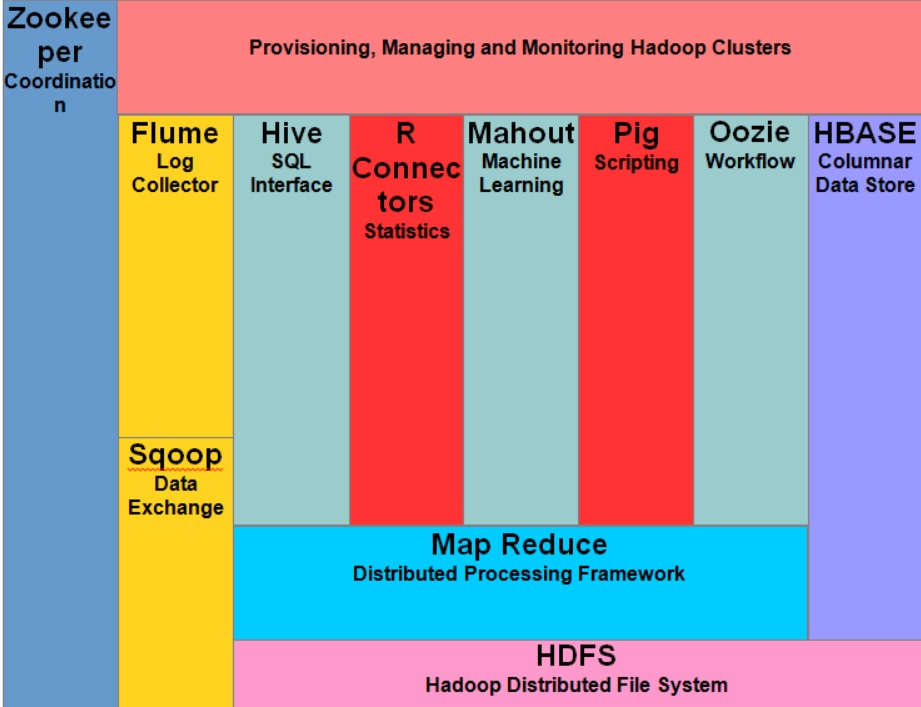 MapReduce is a computational paradigm and programming framework used to create applications that run on Hadoop.

On huge clusters of computing nodes, these MapReduce applications are able to process enormous amounts of data in parallel.

The storage component of Hadoop applications is taken care of by HDFS (Hadoop Distributed File System).

Applications using MapReduce use the HDFS for their data. In a cluster of compute nodes, HDFS distributes data blocks in the form of numerous replicas.

Although MapReduce and its distributed file system, HDFS, are what Hadoop is best known for, the term is also used to refer to a group of related projects that fall under the categories of distributed computing and large-scale data processing.

Every file and directory that was utilised in the namespace was represented by a NameNode.

You can interact with the blocks and manage the state of an HDFS node with the aid of DataNode.

You can use Hadoop MapReduce to process data in parallel thanks to the master node.

The additional servers in the Hadoop cluster known as slave nodes allow you to store data and perform sophisticated calculations.

Additionally, a Task Tracker and a DataNode are included with every slave node. You can then synchronize the processes with the NameNode and the Job Tracker, respectively, using this.

In Hadoop, master or slave systems can be installed locally or in the cloud.

Big Data analysis is best performed on HADOOP clusters because big data is typically scattered and unstructured in nature.

Less network bandwidth is used since processing logic, rather than real data, is sent to the computing nodes.

By simply adding more cluster nodes, HADOOP clusters can be easily scaled to any size, facilitating the expansion of Big Data.

Additionally, scaling does not call for changes to application logic.

The HADOOP ecosystem provides a feature that allows input data to be replicated to other cluster nodes.

In this manner, data processing can continue in the case of a cluster node failure by accessing data saved on an additional cluster node.

In addition to performance, one must be concerned about high availability and failure handling. Network topology is utilized by Hadoop cluster construction to accomplish this.

How to Estimate the Efficiency of an Algorithm? »

Network bandwidth is typically a crucial element to take into account when creating any network.

Due to the difficulty of measuring bandwidth, a network in Hadoop is represented as a tree, and the number of hops between tree nodes is seen to be a crucial element in the development of a Hadoop cluster.

In this case, the separation between two nodes equals the sum of their separation from their nearest common ancestor.

Depending on where the processes are located, different amounts of network bandwidth are available to them.

In other words, the bandwidth we have available decreases as we go away from-

tasks running on the same node

several nodes on the same rack