How to Choose Appropriate Clustering Method for Your Dataset

How to Choose Appropriate Clustering Method, Data clustering is a crucial step in creating a complete and accurate data model.

The volume of data needs to be sorted out based on commonalities in order to complete an analysis.

What commonality parameter yields the greatest results is the key question, as is what exactly qualifies as “the best” in the first place.

It contains an informative analysis of the most popular clustering algorithms. The recommendations taking into account each method’s application are given based on its specifics.

There are four common groups of algorithms that are distinguished based on clusterization models.

There are more than 100 algorithms in existence overall, although both their use and popularity are quite limited.

It is referred to as connectivity-based, or hierarchical, clustering when it is based on the calculation of distances between the items in the entire dataset.

The titles agglomerative and divisive emerged from this precise variation in how the algorithm may combine or, conversely, split the array of information.

The most common and logical form is the agglomerative one, where the amount of data points is first inputted and then combined into increasingly larger clusters until the limit is achieved.

The classification of plants is the most well-known use of connectivity-based clustering.

A specific species serves as the “root” of the dataset’s “tree,” which extends to a few kingdoms of plants, each of which is made up of even smaller clusters (phyla, classes, orders, etc.)

You receive a dendrogram of data after running one of the connectivity-based algorithms, which shows you the structure of the data rather than how clearly it is divided into clusters.

An algorithm’s complexity may prove to be excessive or simply inapplicable for datasets with little to no hierarchy, depending on how this feature is implemented.

It also demonstrates subpar performance because the lengthy processing time is caused by the high number of iterations. On top of that, the hierarchical method won’t produce an accurate structure.

The counter’s requirement for input data is limited to the number of data points, which has no impact on the outcome, and the predetermined distance metric, which is also coarsely measured and approximate.

In our experience, centroid-based clustering is the most used approach because of how straightforward it is in comparison.

The model aims to assign each dataset object to a certain cluster by classifying them. The method’s biggest “weakness” is undoubtedly the random selection of the number of clusters (k).

Due to its similarity to the k-nearest neighbors (kNN) method, the k-means algorithm is particularly well-liked in machine learning. 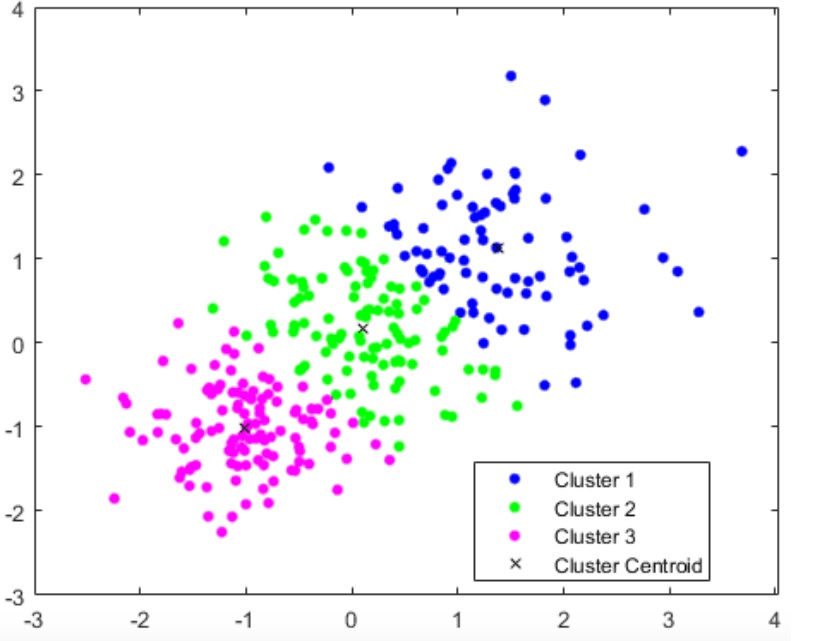 There are several processes involved in the computation process. The first step is to choose the incoming data, which is a rough estimate of how many clusters the dataset should be divided into.

In order to maximize the accuracy of the output, cluster centers should be placed as wide apart as possible.

The program also calculates the separations between each cluster and each object in the dataset. If we’re using a graphical representation, the cluster to which the object is relocated is determined by the smallest coordinate.

The cluster’s center is then recalculated using the average coordinates of all the items. The initial algorithmic step is repeated, but with a newly computed cluster center.

If specific conditions are not met, such iterations continue. For instance, the algorithm may stop if the cluster’s center hasn’t changed or has very slightly changed from the previous iteration.

Despite its ease of use, both mathematically and in terms of coding, k-means has significant limitations that prevent me from using it everywhere. That contains:

i) a careless edge of each cluster since the cluster’s center is given priority over its edges;

ii) an inability to arrange a dataset so that items can be equally categorized into many clusters;

iii) a need to make educated guesses about the ideal k number or perform preliminary computations to define this gauge.

A better level of accuracy is simultaneously provided while avoiding these problems thanks to the expectation-maximization algorithm.

Simply said, it determines how likely it is that each dataset point will be related to every cluster we’ve chosen.

Gaussian Mixture Models (GMM), which make the assumption that the points in the dataset typically follow the Gaussian distribution, serve as the primary “tool” for this clustering approach.

The EM principle is essentially simplified in the k-means method. The biggest complexity the methods hold is that they both demand the input of the cluster number.

Aside from that, the computing concepts (whether for GMM or k-means) are straightforward: with each subsequent iteration, the approximate range of the cluster is gradually specified.

The EM approach, in contrast to centroid-based models, allows the points to be classified for two or more clusters; it merely gives you the potential of each event so you may perform further analysis.

In contrast to k-means, which visualizes the cluster as a circle, each cluster’s borders are made up of ellipsoids of various sizes.

For datasets where the items do not match the Gaussian distribution, the algorithm would simply not function.

The method’s fundamental drawback is that it applies to theoretical issues more so than to actual measurements or observations.

Density-based clustering, the unofficial favorite of data scientists, comes last. The name of the model summarises its basic idea; to partition the dataset into clusters, the counter inputs the neighborhood distance parameter.

The object is related to the cluster if it is found inside the circle (sphere) of the radius. 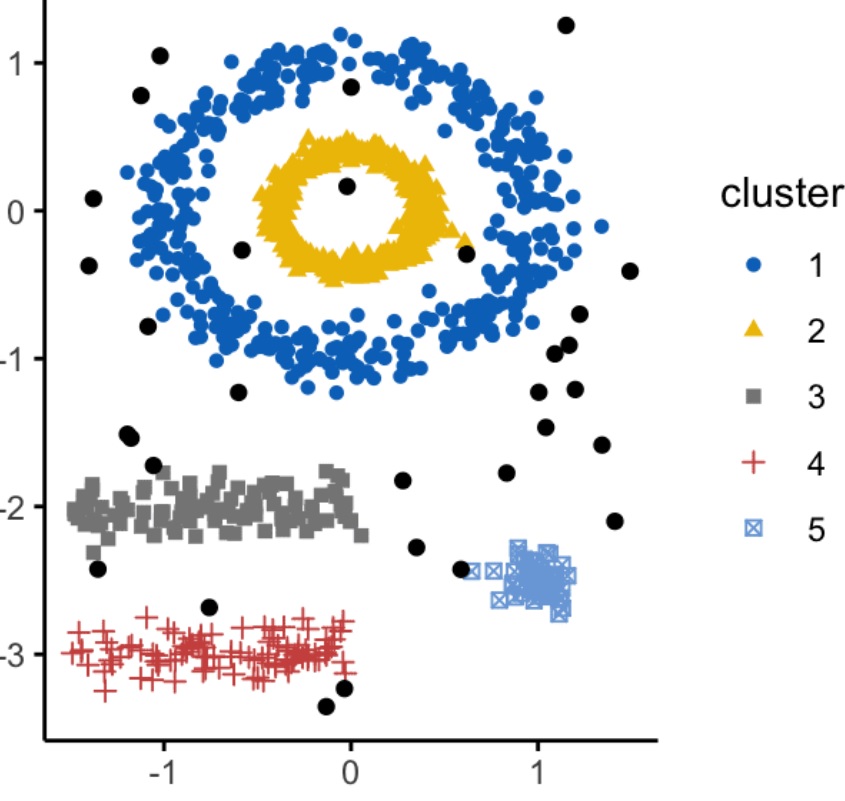 The DBSCAN (Density-Based Spatial Clustering of Applications with Noise) algorithm evaluates each object in turn, modifies its state to “viewed,” and categorizes it as either noise or a cluster before processing the entire dataset.

The DBSCAN-derived clusters are exceptionally precise since they can take on any shape. In addition, the algorithm calculates the number of clusters automatically rather than forcing you to do it.

However, even a masterpiece like DBSCAN has a flaw. The approach performs poorly when the dataset consists of clusters with fluctuating densities.

If the positioning of the objects is too close together and it is difficult to estimate the parameter, it can also not be your best option.

In conclusion, there is no such thing as an incorrect method; others are simply better suited to the specific dataset formats.

You must have a thorough understanding of each algorithm’s benefits, drawbacks, and quirks in order to consistently choose the best algorithm.