Importance of Quartiles in Statistics for Data Science

Importance of Quartiles in Statistics, Data science is ranked as the third-highest demanded profession globally, which is certainly not bad at all.

Millions of students aspire to become data scientists, but honestly, it takes a lot more than just willingness. There is a plentiful subject syllabus and books that the students have to study from time to time thoroughly.

Specific topics in data science are extravagantly practical and very complex, which augments the chances of failing for the students, which is also a reason why many students drop off equidistant the course completion.

One of the most significant reasons for them is statistics. There are several topics in statistics that retrofit the study of data science.

Well, if you are a data science enthusiast as well, the importance of quartile would be a no breaker for you.

a)  The first quartile among the three quartiles is the median found by arranging the values in the ascending order after finding the value that equally divides it into two equal parts.

b) The second quartile in data science is found by arranging the given values in descending order and then finding the value dividing the whole into two equal parts.

c)  The third quartile is found by dividing the data in ascending order and then optimizing the value that diverges them into three equal parts. 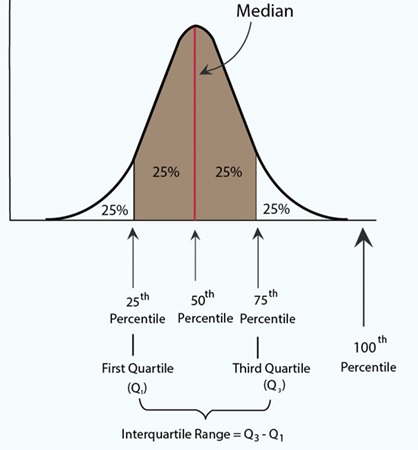 Quartiles play a significant role in the functioning of data science. The quartile is a value that separates the overall data into four quarters.

The most common among all the quartiles is the first quartile, as this has the tiniest information, which is the most relevant.

The scenario is, in contrast, different from that of the second and third quartile wherein the details added are a bit too lengthy, complex, and difficult to understand.

The quartiles are extremely important in data science because it is not limited to the number of data points that a model can handle.

Also, it is crucial to understand the importance of how the data points are distributed, which can be done only with the contribution of quartiles.

Depending on the aim of performing statistical solutions, the users often rely on the first quartile. Quartiles are often considered to be particular percentiles.

Quartiles in data science come under the head of the variability where there are other functions as well, namely the variance, standard deviation, standard error, etc.

Along with quartiles, the percentiles and interquartile range also play a significant role in developing solutions for critical issues in data science.

The percentiles are a measure that indicates the value below which the group of observation takes place, and the interquartile ranges are the measure of the dispersion of statistics and variability that is based on dividing data into quartiles.

Indeed, it is a massive deal for data scientists to apply statistical methods and generate solutions, but the application and usage of methods make it much more adaptive and ease the hard work.

This is the prime reason why aspiring data scientists should thoroughly study all the concepts and theorems.

The students often need a supplementary pinch of assistance when studying, which is why they tend to take statistics assignment help.

Getting stuck on petty things could devour a lot of time. hence, excelling in smaller subject sections would add wonders to the practice of data science.