How to do Binning in R?

Binning in R, you will learn about data binning in this tutorial. Binning develops distinct categories from numerical data that are frequently continuous.

It’s very handy for comparing different sets of data. Binning is a pre-processing procedure for numerical numbers that can be used to group them.

Why do we need binning?

To have a better grasp of the data distribution, you can use data binning to group a set of numerical values into a smaller number of bins.

In this tutorial, arrival delays can be divided into four bins by quartiles using binning.

The borders that divide observations into four distinct intervals are referred to as quartiles. They’re frequently calculated using data point values and how they compare to the rest of the dataset.

Binning is simple to implement in tidyverse. Assume you want four bins with the same number of observations, in which case you’ll need three numbers as dividers:

The dataset is divided into two half by the median. The median of the lower half of the dataset is the 1st quartile or lower quartile. This quartile is referred to as Q1.

The median of the entire dataset is in the second quartile, Q2.

Plotting a histogram before binning can give you an idea of how the data looks. 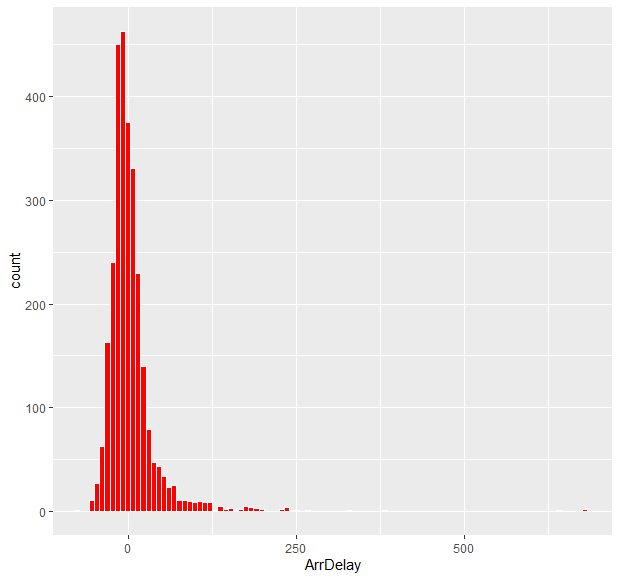 Based on the above plot, most of the flights experience no delays which are roughly bell-shaped and right-skewed.

Let’s get binning now. To begin, divide “ArrDelay” into four buckets, each with an equal amount of observations of flight arrival delays, using the dplyr ntile() function.

This categorizes the data into different bins based on the number of minutes the planes were delayed.

The longer the flight was delayed, the larger the bin label. You can execute the same based on a one-liner code.

Binning is a data pre-processing technique that groups a series of numerical values into a set of bins, as you learned in this tutorial.

Binning can help you better understand the distribution of your data and increase the accuracy of predictive models.

You also learned how to improve data analysis by using a binning method that separates numerical values into quartiles.